If you are a regular reader of Rhyme & Reason, then you know how deep my love affair is with Charleston. There is so much to love about Charleston and so many reasons why it is an incredible place to call home. I walk around the city every day and pinch myself that I get to live in a place so rich with culture, history, beauty, food, and talented + kind people. I think moving to Charleston from such a massive city (Los Angeles) has given us an even greater appreciation for Charleston.

Major cities offer so much. But major cities generally have a higher cost of living and lifestyles that are more of a grind. Charleston is a small city but it is unique in that it offers much of what a major city does. It has restaurants etc of the same caliber as large foodie cities. Plus, New York City is an hour and 25-minute flight away!

P.S. For more on Charleston, visit my Charleston Travel Guide!

Things To Know Before Moving To Charleston

The pros of living in Charleston… where do I begin!? Later on in this post, I breakdown 10 reasons why I think moving to Charleston is a good idea, which is a must-read list if you’ve ever considered moving to the Holy City. In the meantime though, I’d say the #1 pro of living in Charleston is the wonderful high quality of life. So many factors play into this but the people and rich community top the list! In addition, the beaches, food, history, culture, airport and more make Charleston the best place to live. Happiness is high in Charleston!

In my opinion, there are three main cons to living in Charleston. The primary con is that there isn’t a lot of industry. There are some industries, like hospitality, that absolutely thrive in Charleston. But, in general, there aren’t a ton of opportunities unless you work in hospitality, aerospace (thanks to Boeing), automotive (thanks to BMW, Volvo, Mercedes, etc.), healthcare (thanks to MUSC), biotech, or a few other industries. However, this is changing as the job market is growing so much in Charleston and there is an emerging technology community! In addition, South Carolina is friendly to small business owners so it is a great place to start a business. The local economy in Charleston is strong too, which bodes well for job market growth in Charleston.

It could be argued that another con is that a lot of people are moving to Charleston. I’m not really one to talk since we moved to Charleston in 2017 so we’re part of the migration to the Holy City. I think some think it is a con because the way of living in Charleston is so wonderful now and things naturally change with more people, infrustruction, etc. However, I know some Charlestonians love the people moving to Charleston because it brings more interesting people to our city. As of 2019, Charleston was voted the best city in America for nine years in a row by Travel & Leisure. Charleston is up for the award again in 2020 so it’s no surprise that so many people want to move to the Lowcountry!

10 Reasons Why Moving To Charleston Is A Good Idea

It’s More Affordable than the Major Cities of the US

The Quality of Life is Very High

The quality of life in Charleston is extremely high! From day to day, season to season, it’s a happy place to live without too much grind. There are so many reasons that make the quality of life high. The traffic is not bad, weather is great most of the year, the people are kind and generous, the city is beautiful and clean, and there is so much to do.

A note on the traffic: like anywhere, the traffic can definitely be better or worse depending on which part of Charleston you live. It is also all relative. Charleston natives think the traffic is bad and, to them, I’m sure it is. However, keep in mind that we moved from Los Angeles. So, to us, the traffic could never be bad. Our friends that moved to Charleston from other major cities like Atlanta and New York City feel the same way as us. Downtown Charleston is also a walking city. So if you live downtown, you can easily skip driving in favor of walking, biking, or golf carting.

The People of Charleston are Friendly

In my mind, it all goes hand in hand. The quality of life is so high in Charleston that people are very happy. Since people are so happy, people are welcoming, friendly, and kind. The slower pace of life outside of a major city and the nature of Southern hospitality both play a roll in the positive atmosphere of Charleston as well. When you walk down the street in Charleston, people say hello. The people of Charleston are proud to call Charleston home and are warm and inviting in return!

You Can Be Outside Most of the Year

It’s the East Coast and it’s the South so our summers are humid and buggy. Other than the summer months, the weather in Charleston is pretty glorious. In the winter, it can be cozy coat weather one day and warm beach weather the next day. Our autumns and springs are magical! The weather is one of the things we love the most about Charleston because it allows us to live active lives outside on land and on the water.

The food in Charleston is unbelievable! Honestly, after living in a city like Los Angeles where there were so many restaurants at our fingertips, we couldn’t have moved somewhere without a vibrant food scene and incredible restaurants. We love our old favorites but there is also always something new opening to try. Charleston is home to multiple James Beard Award winners and is considered by many to be a premier food hub in the South, on the East Coast, and in the whole country.

A Wealth of Cultural Activities and Arts

For a small city, Charleston has world class cultural opportunities. Charleston has a handful of playhouses and music venues as well as the Gaillard Center that has everything from concerts, plays, book tours, antique shows, jazz festivals, and more. Charleston is home to multiple incredible festivals too like the Charleston Food and Wine Festival, the Historic Charleston Foundation Festival of Houses and Gardens, High Water Music Festival, and the Spoleto Performing Arts Festival.

Proximity to the Beach

There is no denying that Charleston’s proximity to the beach is a huge plus of living in Charleston! We have a handful of beaches surrounding downtown Charleston that all offer something different including Sullivan’s Island, Folly Beach, Isle of Palms, and more. Read my guide to Charleston beaches for more scoop!

I really love getting dressed up and having occasions to do so. Charleston is an old-world city so I love that the city’s residences pay the city respect by getting dressed up. In the winter, I’ll wear a dressy dress with a fur and heels while Edwin wears a coat and tie and nobody bats an eye. At the same time, I could step out in jeans and a sweater and Edwin could dress in pants and a polo and we’d be perfectly comfortable and appropriate as well. The summer brings about summer soirées just as often as beach bbqs. It’s a beautiful mix that I really love. It’s not for everyone but, at this point, I wouldn’t love living in a super casual place as it’s not very me.

The airport in Charleston is fantastic! As crazy as it sounds, it honestly affects our lives in such a positive way because we travel a lot and because Edwin travels for work regularly. The airport highlights are endless: it isn’t crowded, it runs smoothly, it’s clean. It has good food options, it doesn’t have any traffic going in and out of it. It has affordable parking, and it has flights to a decent amount of places. The airport is always adding new flight routes and is expanding at a great rate. We have direct flights to London, New York City, Chicago, Miami, DC, Atlanta, Denver, Dallas and a lot of other major cities and smaller-scale cities. The one thing Edwin and I need is a direct flight to Las Angeles… someday!

Proximity to Other Destinations

I love the location of Charleston! From Charleston, we can drive to so many amazing places in a few hours like Savannah, Asheville, and St. Augustine among so many other spots. Charleston is about an hour and a half long flight from both New York City and Miami. It’s easy to explore and travel from by car and plane!

I hope this post was helpful to some of you! It’s pretty clear that I absolutely love Charleston. I feel lucky every day to be able to call Charleston home! As always, feel free to shoot me an email if you have any follow-up questions. xx

What I Wore in Savannah

is a Charleston-based blog with curated shopping discoveries, reflections on motherhood, celebrations of family life, love notes to Charleston, and lots of joy around pursuing the good life. 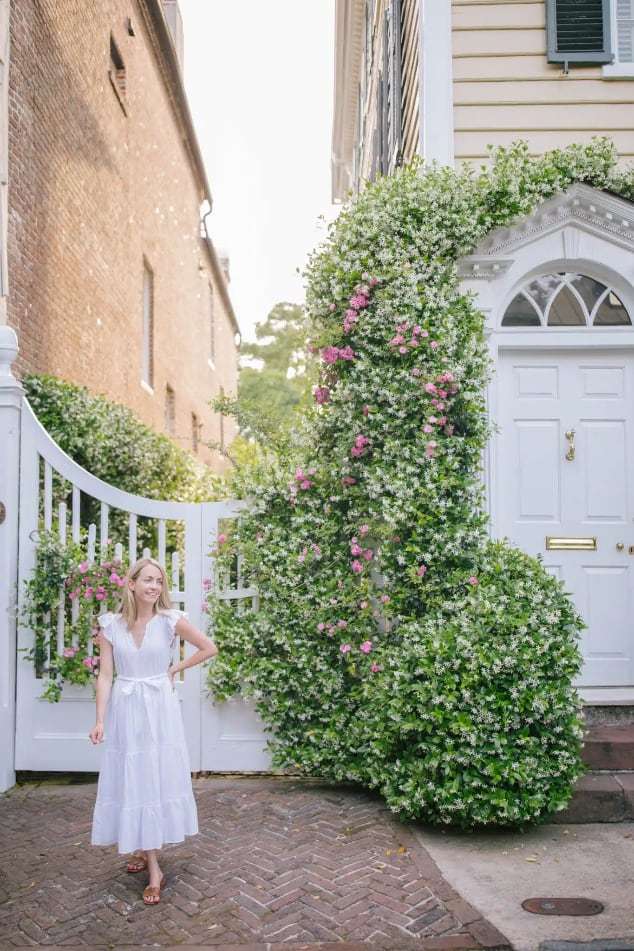